Up Close & Personal : Limping To The Center Of The World - Timeri N Murari

UPDATE:
It is my honour that Timeri N Murari wrote introduction to my first Spiritual Fiction "Songs of the Mist" published in Dec, 2015
____
Last month I had a chance to meet one of the most famous writer from Chennai, Timeri N Murari, through our Sans Serif Book Club, where we had invited him to interact and share his personal thoughts on the books that he has written. For this meeting, I chose to read his book about traveling to Mount Kailash, Heavenly abode of Lord Shiva,“Limping To The Center of The World” and the more famous “The Taliban Cricket Club”. Since spiritual journey, specially in Himalayas, has always been my passion, I would like to talk about our interaction on the journey to Mt. Kailash, which he undertook just after his knee surgery (...hence the word 'limping' in the title). 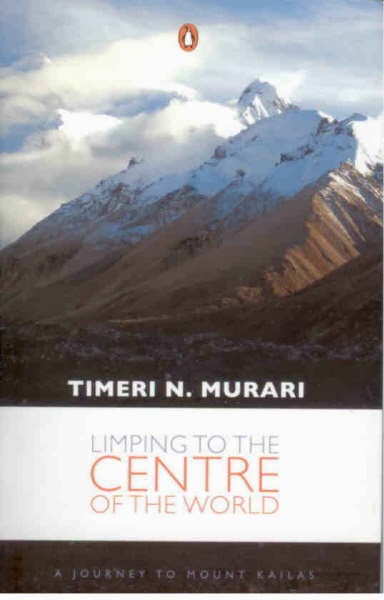 In our discussions, he gave a beautiful presentation on his journey, which is reproduced below.... amazing images and a great journey.

But before that, let me give you a brief introduction of the author…

A BRIEF NOTE…
Timeri Murari (born 29 July 1941) is an Indian novelist, journalist, playwright and screenwriter. He is the author of fourteen published novels, including best-sellers The Taliban Cricket Club (2012) and Taj (2007), and has written extensively for Indian and international newspapers including The Guardian. He has also written the screenplay of the award-winning Hindi movie Daayraa (1997), which was voted one of the ten best films of 1997 by Time magazine. He adapted and directed it as a stage play, The Square Circle, at the Leicester Haymarket Theatre in November 1999, starring Parminder Nagra of “Bend It Like Beckham” Fame.
- CurtseyWikipedia

To read more about the author at his website, please click here…
______________
After the presentation, he got us engaged with his thoughts about his books as well as with some interesting answers to few of our queries. One of our members recounted her being so impressed by the book that she followed his footsteps to Mt. Kailash. In an answer to one of the question, he said that he is more comfortable in writing as first person account rather than 3rd person, as then, he feels distant from his characters.

Usually, the author said that he starts with a seed of some interesting thought, idea that captures his imagination, for writing his books, like the Taliban Cricket Club. That book was started, based on a small news item in paper about Taliban wanting to start a cricket club in Afghanistan. That particular news item got him thinking about the same and he wrote the book.

When asked, how does he feel about portraying real life characters in his book with the real names, e.g. Pandey Ji 'the Police officer', mentioned (in not so positive characterisation) in his book about travelling to Mt. Kailash, he said that he did not like to change the names because then one looses connection with the character. Yes, since no one had complained, he continued to keep it, and Yes, he is still in touch with some of the group members of Mount Kailash Yatra.

He talked lovingly about Bhima, the 'son' who he and his wife were not able to adopt due to age restriction, about whom he has written a book “My Temporary Son”. When asked, does Bhima know about his connection with the author, he said, "well not fully but yes he does know about us and we keep visiting him over the year to his house in Europe".

About his characters he said, that as the story grows, you realizes that one person starts to take over the story.

It was a wonderful to talk with him as well as his wife, who shared her own thoughts about Bhima.

Limping to the centre of the world

More PowerPoint presentations from Timeri N Murari
What I seek is certainly not a God man but the physical presence of a power beyond religions and even God. The mountain could be that. I don’t know.
Religion, whichever we choose, is the narrow prism which blinds us to God; however we define the invisible creator of this world we inhabit. We have enslaved God, if he exists, in the iron cage of our various beliefs and there is no escape for him.
Love is too complex, with too many layers to explain to strangers.
Magical, mystical, mysterious, Mount Kailash must be like no other place on this planet. Such an accumulations of belief and worship over the millennia must surely mean that Kailash is the preserve of some powerful spiritual force, though without any claim to be a place, Lourdes, for miraculous physical cures.
Karma has nothing to do with fate or destiny, nothing to do with vengeance, rewards or punishment. Karma, simply, is. … What you give out is what you receive. Karma applies not merely to the present, the future and the immediate past but through one’s many lives, past and future.
We have created a society which consumes only for the sake of consuming, with little joy and no passion. Our possessions possess us.
When did we displace nature as our God and allowed men to slip and slide into our spiritual imagination. We have separated God from Nature. God has taken human form created in our images.
Mahatma Gandhi made a comment which I admire, “God has no right to show Himself to man except as a loaf of bread.”
Even just seeing two mountains – Mt. Ganesha and Mt Annapurna out of those 840,000, inspires awe. I have traveled through Rockies and the Alps but they don’t have the same sense of sanctity; they are too trampled upon, too slickly commercialized, too packaged, places of leisure and pleasure, not of awe. There’s a sense of remote aloofness to these two mountains, an ethereal solitude.
Kailash has touched us already, filling us with different thoughts and feelings. I know I am changing but as yet I am not sure how.
A writer needs memory and emotions to write about a character.
The far snowy mountains draw me towards them like a magnet. It’s meditative, hypnotic landscape with no distractions to draw the eye or fire the imagination, and thoughts, the very acts of thinking or remembering, drift away. I am not surprised when I emerge from something like a trance an hour later and believe that for the whole hour I had melded into the road, the mountains, and the sky.
No photograph or documentary film can inspire such awe and worship as seeing Kailash, even at this distance. Its sacred because man has deemed it to be sacred and so it reflects his desire and is sacred. Quite rightly, he is worshiping nature and not man.

The beauty here (Mount Kailash) lies in its very starkness and the land is monochrome like an old photograph. The moon highlights the silhouette of the mountains and the plain stretches away like washed silk. I close my eyes and gradually no longer hear the birds or the wind. I am enclosed in my own silence, drifting through a void which has no beginning, no end. It’s easier to enter this state of nothingness here, having discarded my past, and with the only future, Kailash.
I know I have come to believe in Kailash and Shiva – one and the same – not within the narrow confines of a religion but as mystical magnets that have drawn me steadily towards them.
We need a visual manifestation of something natural, a rock or a mountain, to which we ascribe spiritual properties to help us reach out to a greater power. I do believe that Kailash, because of the belief in it by four religions, must have a greater universality; that it does not belong to one belief alone. In one way I am thankful that this sacred place is in remote Tibet and not somewhere within India’s borders because then Hindus, specially our fundamentalists, would claim it for their very own and exclude other religions from such a communion.
I don’t feel any more a Hindu – standing here looking across the chasm separating me from the Mountain. I do feel however, that I am near something spiritual that is touching me very deeply. I am also touching the belief of all those who have come here before me over the millennium, giving it its sacredness, for without them this would be merely another mountain.
I went with a vague belief in God and returned with a strong belief in God as an energy, a mysterious force, an incomprehensible power that deliberately shaped not only our natural world but, in a fraction of a moment, created a universe. I never had an image of God in my mind when I prayed before but now I do – not a face, but a mountain and the sky.
__
Shashi
ॐ नमः शिवाय
Om Namah Shivaya
PREV                                HOME                              NEXT

Email ThisBlogThis!Share to TwitterShare to FacebookShare to Pinterest
Labels: Author, Limping To The Center Of The World, Mount Kailash, Shashi, Timeri N Murari, Up Close and Personal