THE READER: The Farther Reaches of Human Nature - A H Maslow 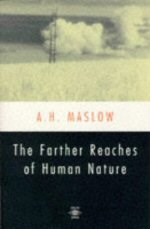 This is one of the great books that I have recently on the Human Nature and innerself. What I really liked in this book, is that Maslow is trying to give us insights about Spirituality and innerself, peak experiences (kind of toned down enlightenment) scientifically. Its an amazing book that has impressed me immensely. Below is a little introduction and then moving on to give you the specific thoughts that has impressed me immensely… read on…
Introduction
An indisputable fact about the work of A. H. Maslow is that it gives off sparks – very nearly all his writing gives off sparks. An attempt to understand this by thinking him simply as psychologist would probably prove futile; he must be first thought as a man, and then as one who worked very hard at psychology or rather, who rendered his growth and maturity as a man into a new way of thinking about psychology. He gave psychology a new conceptual language. He said at one place, “we must remember that knowledge of one’s own deep nature is also simultaneously knowledge of human nature in general.” Maslow, in one of his research paper, tells how he begins his studies of self actualization. To begin with he studied his two teachers as he could not be content simply to adore, but sought to understand. Why were these two people ‘so different from the run of the mill people in the world?’
The resolve to seek answers to this question, it becomes clear, set the direction of his research in psychology, and disclosed, as well, the sense of the meaning of human life. Being a scientist, he sought a generalizing account of the excellences he had discovered in these two teachers. He began to collect other such subjects for study – and went on identifying and studying these people for the rest of his life. This sort of research, he often pointed out, gives you a fresh and encouraging view of the mankind. It shows you what can be.
The climax of self actualization is the peak experience. Peak experience is a splendidly naturalistic idiom, hospitable to all the similar meaning in the vocabularies of religion and mysticism, yet confined by none of them. A peak experience is what you feel and perhaps ‘know’ when you gain authentic elevation as human being.
One aspect of Maslow’s later thought deserves attention. The older he got, the more philosophical he became. It was impossible, he found, to isolate the pursuit of psychological truth from philosophical questions. How a man thinks can not be separated from what he is, and the question of what he thinks he is, is never independent of what he is in fact, even though this, intellectually, may be an insoluble problem.
– Henry Geiger
Text and Image Sources
Wikipedia
Book: The Farther Reaches of Human Nature
ॐ नमः शिवाय
Namah Shivaya
The Farther Reaches of Human Nature
By A H Maslow
1 – Toward a Humanistic Biology 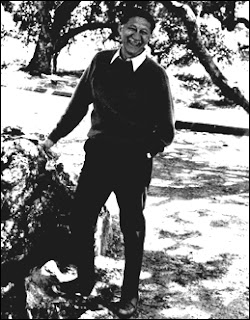 It’s my personally chosen task to ‘speculate freely,’ to theories, to play hunches, intuitions, and in general to try to extrapolate into the future. This is kind of deliberate preoccupation with pioneering, scouting, originating, rather than applying, validating, checking, verifying. Ofcourse it’s the latter that is the back bone of science. And yet I feel it is a great mistake for scientist to consider themselves merely and only verifiers.
If we want to answer the question how tall can the human species grow, then obviously it is well to pick out the ones who are already tallest and study them.
I must re-assert that we have come to the point in biological history where we now are responsible for our own evolution. We have become self evolvers. Evolution means selecting and there fore choosing and deciding, and this means valuing.
They (Sweethearts) are so fascinated with each other that examining, looking, listening, and exploring becomes itself a fascinating activity upon which they can spend endless hours. With a non-loved person, boredom will set in too rapidly.
Love for a person permits him to unfold, to open up, to drop his defenses, to let himself be naked not only physically but psychologically and spiritually as well.
Finally, most important of all, if we love or are fascinated or are profoundly interested, we are less tempted to interfere, to control, to change, to improve.
However, basically need-satisfied and already self actualizing people with such meta-motives as truth, goodness, beauty, justice, order, law, unity etc., may suffer deprivation at the meta-motivational level.
Something is considered to be a need if its deprivation produces disease.
2 – Neurosis as a failure of Personal Growth
I believe that helping a person to move toward full humanness proceeds inevitably via awareness of one’s identity (among other things). A very important part of this task is to become aware of what one is, as a species, of one’s capacities, desires, needs, and also of one’s vocation, what one is fitted for, what one’s density is.
It’s certainly possible for most of us to be greater than we are in actuality.
We often run away from the responsibilities dictated (or rather suggested) by nature, by fate, even sometimes by accident, just as Jonah tried in vain.
We fear our highest possibilities (as well as our lowest ones).
We are generally afraid to become that which we can glimpse in our most perfect moments, under the most perfect conditions, under conditions of greatest courage.
Delirious happiness can not be borne for long. Our organisms are just too weak for any large doses of greatness, just as they would be too weak to endure hour-long sexual orgasms, for example.
There are people who can not manage that graceful integration between the humility and the pride which is absolutely necessary for creative work.
3 – Self-Actualizing and Beyond 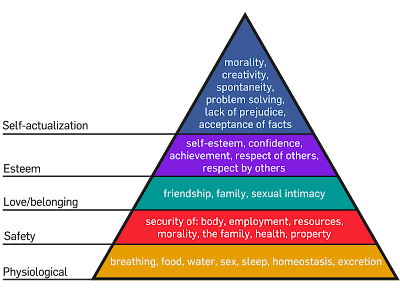 Being – values: Self-actualizing people are, without one single exception, involved in a cause outside their own skin, in some thing outside of themselves.
- Behaviors leading to self-actualization
1)      Self-actualisation means experiencing fully, vividly, selflessly, with full concentration and total absorption.
2)      Self-actualisation is an ongoing process. To make growth choice instead of the fear choice a dozen times a day is to move a dozen times a day towards self-actualisation.
3)      To talk of self-actualisation implies that there is a self to be actualized.
4)      When in doubt, be honest rather than not
5)      One can not choose wisely for a life time unless he dares to listen to himself, his own self, at each moment in life and to say calmly, ‘no I don’t like such and such’
6)      Self-actualisation is not only an end state but also the process of actualizing one’s potentialities at any time, in any amount. It does not mean doing some far-out thing necessarily, but it may mean going through an arduous and demanding period of preparation in order to realise one’s possibility. Self actualization means working to do well the thing that one wants to do.
7)      Peak experiences are transient moments of self actualization. They are the moments of ecstasy which can not be bought, can not be guaranteed, can not even be sought.
8)      Identifying defenses, and after identifying, finding the courage to give them up.
PART II CREATIVENESS
4 – The Creative Attitude
The difference between inspiration and the final product e.g. Tolstoy’s ‘War and Peace’ is an awful lot of had work, awful lot of discipline, an awful lot of training etc…
Science is a technique, social and institutionalized, where by even un-intelligent people can be useful in the advance of knowledge.
Observation: The creative person, in the inspirational phase of the creative furor, loses his past and his future and lives only in the moment.
It (the mystical experience – lets say) is always described as a loss of self or of ego, or some times as transcended of self. .. There is universally reported a seeing of formerly hidden truth, a revelation in the strict sense, a stripping away of veils, and finally, almost as always, the whole experience is experienced as bliss, ecstasy, rupture, exaltation.
One main characteristic of the peak experience is just this total fascination with the matter in hand, this getting lost in the present, this detachment from time and place.
Creativeness is therefore systemic quality of the whole person; it’s not added to a person like a coat of paint or an invasion of bacteria
6 – Emotional Blocks to Creativity
Primarily, the sources of creativeness of the kind that we are really interested in, i.e. generation of really new idea, are in depths of human nature. In it’s deeper self.
Any technique, which will increase self-knowledge in depth should in principle increase one’s creativity by making available to one self these sources of fantasy, play with ideas, being able to sail right out of the world and off the earth; getting away from common sense.
Common sense means living in the world as it is today, but creative people are people who don’t want the world as it’s is today but want to make another world.
An idea is just the beginning in a very complex process of working out.
8 – Fusion of Facts and Values 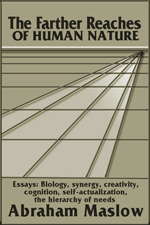