...for winning All Expense Paid Spiritual Retreat in Rishikesh (Himalaya) in Spiritual Haiku Contest 2013  Click here to know more about it... - Sponsored by "Paras Dharma Ashram" - An organisation, based in Kushinagar, which believes in making people's life better through love, compassion and selfless service.

AND THE WINNER OF RETURN AIR TICKET ALONG WITH ALL EXPENSE PAID SPIRITUAL RETREAT IS...

Julie Warther is a member of the Haiku Society of America and the 2012 winner of the Robert Frost International Haiku Award.  She recently completed a two week residency at The Studios of Key West in Florida and is a regular contributor to a number of both print and online haiku journals.  Julie lives with her husband and three children in Ohio (USA) where she enjoys the small-town life.
...AND THE FOLLOWING POETS (IN ALPHABETICAL ORDER) WIN ALL EXPENSE PAID WEEK LONG SPIRITUAL RETREAT IN RISHIKESH…

(FOR OTHERS, DON'T DESPAIR, SPIRITUAL HAIKU CONTEST 2014, WILL BE ON SHORTLY. TO BE NOTIFIED FOR THE SAME, PLEASE SEND A MESSAGE AT THE ADDRESS WRITTEN BELOW...)
Nazarene Garmonsway
University Student  - New Zealand
in moonlit dust, forms
Suspended in forest shade
Like shadows punctured,
__
Kate S.  Godsey
Psychotherapist, poet, photographer - USA
let me change like clouds
unfolding into faces
of the infinite
__
Anna Lipniacka
Physics Professor - Switzerland/ Norway
The Sea
Salty water flows
sweeping my fingers like time
I was seabed once
__
Claudia Schoenfeld
Event Manager – Germany

dot, by dot, by dot,
lanterns strewn across the stream,
i follow seaward
__
Claudia Schoenfeld lives with her family in a small town close to the Black forest. She blogs at 'Jay Walking The Moon'  and is co founder of dVerse Poets pub, a bustling and alive online poetry community. She loves traveling, painting, exploring nature on her road bike and every once and a while (psshhh) she steals away to play the piano in the half-dark..
Eduard TARA
Mathematics teacher - ROMANIA

Born on February 10, 1969, in Iasi, Romania. Mathematics teacher at a secondary school near Iasi. Member of Romanian Haiku Society since 1992. From 2002, he had won 130 prizes at international haiku contests and 12 prizes at international tanka contests. Awarded haiku poems in 26 countries, all the continents (excepting Antarctica…). The poems were written or translated by the author himself in 20 different languages.
__
Sasa Vazic
Journalist, translator, editor, writer - Serbia
at the edge of spring . . .
the dark scent lingering in
a wilted rose bush
__

Saša Važić is a freelance journalist, astrologer, translator, writer of prose and poetry, essays, book reviews. Author of over 1000 articles on various topics which appeared in newspapers and journals, member of the Association of Literary Translators of Serbia. Co-Owner, Co-Publisher and Co-Editor of Simply Haiku, member of the editorial boards of the Haiku Association of Serbia and Montenegro's magazine, Osvit, of Haiku Novine (Niš, Serbia), International Editor for moonset (Oregon, USA), and member of the World Haiku Club and the Haiku Oz (Australia), her haiku have been included in over ten national and international haiku anthologies and in a number of national and international haiku magazines. To date she has received 52 awards and commendations. Largely, through her translation efforts she has brought English language haiku poetry, articles and books to Balkan readers and vice versa. Važić is the editor of the bilingual Haiku Reality
Jana Žufić
Artist - Crotia
withering wind’s wake –
unveiling stars beyond stars
beyond bare branches
__


Born on December 27, 1978 in Ljubljana, Slovenia, Jana Žufić is a multimedia artist and 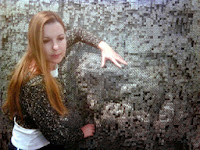 transdisciplinary experimenter. Her fascination with “the poetics of orderly chaos”, as she calls it, is reflected in her works. She lives in Croatia, between Poreč – a small town on the western coast of the Istrian peninsula – and the capital Zagreb – home of the Zagreb School of Animation and the New Tendencies*, which both played an important role in her formation. Her main field of interest lies at the intersection of new media, (animated) cinema and contemporary art. She worships Mother Nature, thus enjoying outdoor activities such as swimming or hiking, but also engaging in indoor yoga practice on an almost daily basis. She started writing haiku in January 2012, at the turning point of a spiritual crisis.  [*Pictured in front of Vjenceslav Richter's Systemic Sculpture, Museum of Contemporary Art, Zagreb, Croatia]
___


CONGRATULATIONS EVERY ONE, YOU ALL WILL BE RECIEIVING AN EMAIL FROM PARAS DHARMA ASHRAM VIRTUAL CITIZEN CO-ORDINATOR WITHIN A WEEK OR TWO WITH MORE DETAILS AND INFORMATION.

FOR OTHERS, DON'T WORRY, SPIRITUAL HAIKU CONTEST 2014, WILL BE ON SHORTLY. '

TO BE NOTIFIED FOR THE SAME, PLEASE SEND A MESSAGE AT...

NOTE:
A) Number of poetry submissions were very less, so the organisers have had decided to increase the number of winners in Spiritual Haiku Contest.

B) To know tentative details of the Spiritual Retreat program, please click here...