INTERNATIONAL KOLKATA BOOK FAIR
When I think of Kolkata, I remember my grandfather, Indian Statistical Institute, Dakshineshwar Temple, Durga Puja and Bhakti moment of Indian spirituality on the back ground score of Rabindra Sangeet in the noise of road side tea stall where you can 3/6 cup and football game's reviews from across the globe. The beauty of the languidly moving vehicles - zigzagging through numerous city jams, but also zipping across the under ground the first metro rail and an IT hub that’s humming to take over the world, from the outskirts of the city. That’s Kolkata for you in nut shell but for me it’s more than all that. And visiting the city on 30th and 31st January, 2016 for the International Kolkata Book Fair on the invitation of my first book "Songs of the Mist" publishers Notion Press, is an amazing opportunity to recharge my soul...
There are many memories from past of the city. My grandfather ran away from the back waters of eastern UP to study Ayurveda in Kolkata, my younger brother, who was a doctor, ran away from the MNC trap of Infosys, to come here to study at ISI - the one of the world’s foremost statistical institute that has broken all cryptography puzzles - almost all and I ran away from doing mundane things in Chennai to come and stay in the vicinity of Dakshineswar temple to re-connect with my soul.
Sitting across the Holy River Ganges, next to the beautiful Temple, sipping hot cup of tea is bliss. Across India, this is the place for finding oneself and one’s passion, a place that reinvents your life at a totally different level.
I remember visiting the heartland of Bhakti Yoga moment, sitting in the temple in Mayapur, where Krishna instilled the love to the most fervent proponent of Bhakti moment and get the same spark of love and compassion.

The most vibrant example of the continued fervor is the ISKCON world headquarters, which is beacon of love for Krishna, across the world.

The many decades of visit to the place, soaking up in the cultural environment, breathing the rasa and rang of Durga Puja fervor...,

... which got reflected in my second book of the series The Monk Key, where Ashutosh, after running away from his IIT - BHU course towards Himalaya, in the first book of the series “Songs of the Mist” returns not to Varanasi, but to ISI Institute and Dakshineshwar temple, which gave him solace and the answers to the eternal question of one’s own reason for existence and ‘who am I’.
The city transforms not only the living being, but the imaginary characters of mind, living across pages of fiction and fulfill their dreams. That is my friend is Kolkata - ignites the fires of your dreams and burns you with it’s passion to purify your golden soul.

I am looking forward to meet my readers and peers at Notion Press Stall, at Kolkata International Book Fair, where I will be interacting with the readers on 30th Jan and 31st as an Author 'Shashi' of the book "Songs of the Mist", please do join me. 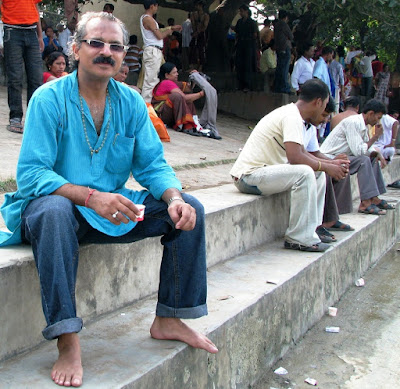 Hindu Lit For Life: And the winner is Easterine Keri

As usual, I could pick out the winner of the Hindu Literary Prize this year too and it was a pleasure to show the tweet to the winner Dr. Easterine Keri, (Since she does not have a twitter account) I had sent an hour earlier than the announcement. She is a very soft-spoken and highly sensitive person and interacting with her was such a pleasure. Her award winning book "When the River Sleeps" has got me thinking about the spirits, dreams and journeys that has been entangled within the landscape of my own book, "Songs of the Mist".

"When the River Sleeps" is just like meandering through the forest, running eddies around the pauses in living and then breaking free to run with demons and dreams. It is a lovely book, enjoyed it throughly.

The beauty of Hindu Lit Festival is the relaxed atmosphere, where you are free to chose what you would like to do, or hear or interact with. The stalwarts of literature, Music and creative fields, spend their time in unassuming way and willing to share their thoughts with any one around. After 6 sessions, since Hindu Lit Festival's inception, it feels like home.

Day 2 - day 3 had an impressive array of discussion and interaction lined up. I am giving below some of the images and thoughts from the day for those, who have had missed being there.

Burkha Dutt: The passionate firebrand journalist
It was interesting play on the role reversal as Anita Ratnam asked not to speak until she has heard the question... The interview was engrossing, where Barkha Dutt opened her heart and exposed her passion to which she is married to. Unlike the Wikipedia report which mentioned her being married to a Kashmiri Muslim. Some of her thoughts from the interaction... 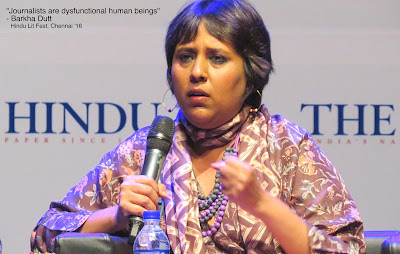 So I'm told, "oh you're married to a Muslim that's why you're secular." Since when has secular become such a bad word?"
"Rahul Gandhi is the most incompetent in media, I think Arnab Goswami was soft on him in the interview"
"Social media is double edged sword. Twitter is the new PTI"  - Barkha Dutt


and some of his thoughts...
"The ending has to be such that it keeps gnawing at you for the rest of your life!"


"As long as you don't force your faith on others and your belief gives you peace, then what's the harm?"
"Faith when it becomes blind, it becomes a problem"
"There is no word in Sanskrit called blasphemy. Why? Because it didn't exist."  - Amish

Shashi Tharoor: The Eloquent Politician
A great 9 point presentation on the networked world, where Shashi Throor proved beyond a doubt that India has come of technical age, discarding the ancient Rope trick and snake charmer skin.... 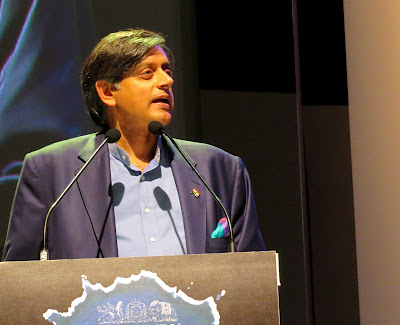 Some of his thoughts from two session he interacted with...
"A student who's not good enough to get into an IIT maybe qualified to get into a Harvard"
"We have a Prime Minister who is a doctor who can diagnose the problem, but can't deliver the medicine, "
"I strongly believe that the politics of performance will defeat the politics of identity," - Shashi Tharoor

Dr. Chithra Madhwan: The Soul Keeper
I have had attended Dr. Chithra Madhwan's many lectures and her passion for safeguarding the ancient temple architecture comes out so clearly in every one of her presentations. Sharan Apparao's moderation was beautiful and brought out the right sense of desperation among the audience for the defacing our cultural heritage and ancient architecture. 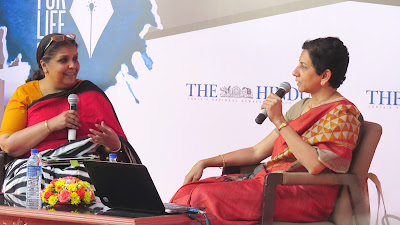 Dr. Chithra Madhwan voiced her worry that the insensitivity of people will soon lead to complete disintegration of temples and we need to know where we came from to take it forward. Temples were not only about religion and education. It also functioned as banks, panchayats, library and filled the major social gap in terms of local administration and safeguarding the people living around.

The Forbidden Fruit : The best and the frank session of the Festival
The fearless and frank opinions of the panelist in the session made it one of the best session. I would leave you with some interesting thoughts on the Eroticism and some of the author's who have taken the genre to the new heights...


"I need to have strong feelings about what I write, and for the person who read it to feel it too"
"In the west we have moved to a set of new taboos that I call the tyranny of virtue."


"Happiness is a state of motion, a trajectory The idea that happiness is a place you get to is destructive" - Lionel Shriver

"It is my theory that romantic love is a terminal illness. It is not normal"
"Sex, love and violence are part of each other. To have an effective story, something has to happen,"
"The kind of love I would like to cultivate is one where your partner becomes your best friend. It's more soothing" - Margaret Mascarenhas

"As writer you have to make an imaginative leap of other people's experiences." says Alaxander McCall Smith, who is known to write 1000 words per hour and has written 80 novels and sold more copies than Michael Jackson's Thriller. When I asked him about his writing style being close to P G Wodehouse, to which he smilingly admitted that he had heard that before. When I asked him about why his villains are not actual villians in the gory sense of the words, he said "If you just focus on the bleakness and suffering, every novel would be a tragedy."

Now I will leave you with some images starting with Mr. N Ram of Hindu, who for the first time in 6 years, was actively engaged with the going on of the festival, moderating few session and probably the most frequent questioner from the audience.

Leaving you with a quote from my book "Songs of the Mist" fluttering on the Opinion Tree at the Hindu Lit Fest Venue....

"Man has always tried to rewrite history, but the mind is unforgiving, more so is the time"

Hope you have enjoyed the journey, see you all next year at Hindu Lit Fest, meanwhile enjoy reading good books and if possible write the book, that is lurking within your heart. I will...