FOREMOST EXPONENTS OF SOULFUL SINGING HAS TOUCHED MY INNER SOUL...

The moment I reach the foot hills of Himalaya, the soulful Sufi songs of Abida Praveen turns into a pulsating sphere of earth colors, submerging all my consciousness into the vast sea of joy and happiness. The effect of her songs, the words of Sufi saints and the pure mountain air of Himalaya is such that all my worldly worries retreat into oblivion and only the ‘now’ exists, to be cherished as in eternity. The queen of Sufi Songs, Abida Praveen, remains to be my favorite of all times and when the chance came to meet her and hear her soulful singing, I was blissful.

Abida Praveen : A brief note
Abida Parveen (born 1954) is a Pakistani singer of Sindhi descent and one of the foremost exponents of Sufi music (Sufiana kalaam). She sings mainly ghazals and her forte, Kafis, a solo genre accompanied by percussion and harmonium, using a repertoire of songs by Sufi poets. Parveen sings in Urdu, Sindhi, Saraiki, Punjabi and Persian, and together with Nusrat Fateh Ali Khan is considered one of the finest Sufi vocalists of the modern era.

Abida performed on the internationally acclaimed Pakistani show Coke Studio, on which she sang three songs, including Ramooz-e-Ishq, Nigah-e-Darwaishaan, and Soz-e-Ishq

A legend both at home and abroad for her grace and soulful Sufi strains, Parveen over the years has stayed true to her classical origins, which she mastered under the tutelage of Ustad Salamat Ali Khan. Having started off her career from Radio Pakistan, Hyderabad, she credits her husband, late Ghulam Hussain Sheikh, a respected director of music at Radio Pakistan, for its success. A recipient of the 1982 President's Pride of Performance Award and the 2005 Sitara-e-Imtiaz, Parveen is indeed one of the foremost exponents of kaafi poetry and ghazal singing in Pakistan.

Here is one of her sound at the Coke Studio and hope you will enjoy her singing as deeply within as I do.

A BOOK MAKER WHO USES PHOTOGRAPHY AS HER VOCABULARY…

DAYANITA SINGH is the first Indian to have a solo show at London's famous Hayward Gallery in 2013, who vehemently refuses to use Digital Cameras and computers to design and create her books. She loves making her books by her own hand, armed with scissors, knives of various form and sizes with scotch tape, instead of Cntrl+C and Cntrl+V, which is the usual way the 21st century world works in almost every field now.

Her latest book FILE ROOM is, in my opinion, symbolizes the Digital divide that’s making creativity into something common and superficial. Now you find smart phones capturing images, in every situation, instead of living those moments of 'now'. And as she says, in introduction for the book…

FILE ROOM
… is an elegy to paper in the age of the digitization of information and knowledge.
When I got invite from Sharan Apparao of the famous Apparoa Gallery in Chennai, for the launch of the book – File Room by Dayanita Singh, I had no clue that I am going to have an ecstatic journey through the labyrinths of creative minds. Minds? Well, I did forgot to mention that I actually went to hear T M Krishna, the famous Carnatic music vocalist, who was launching the book “File Room”.

I have had heard of Photo journalists, Photographers of different genre like Fashion, Sports, Digital etc. but I had absolutely no idea what is photographic artist is, till the time I heard Dayanita Singh talk about her journey. From studying to become a script designer at NID, to Documentary Photography and finally to creating books with the script of analog images (for those, who have not used or even seen those big bulky camera’s with actual ‘physical’ film rolls and the infinite wait to see the results, it’s like the difference between e-book and physical book that you can hold close to your heart, while you dreamily fill your vision of love mixed with sighs of the characters from the book).

But before I go about sharing my impressions from the talk by those two amazing artists, let me give you a brief bio… 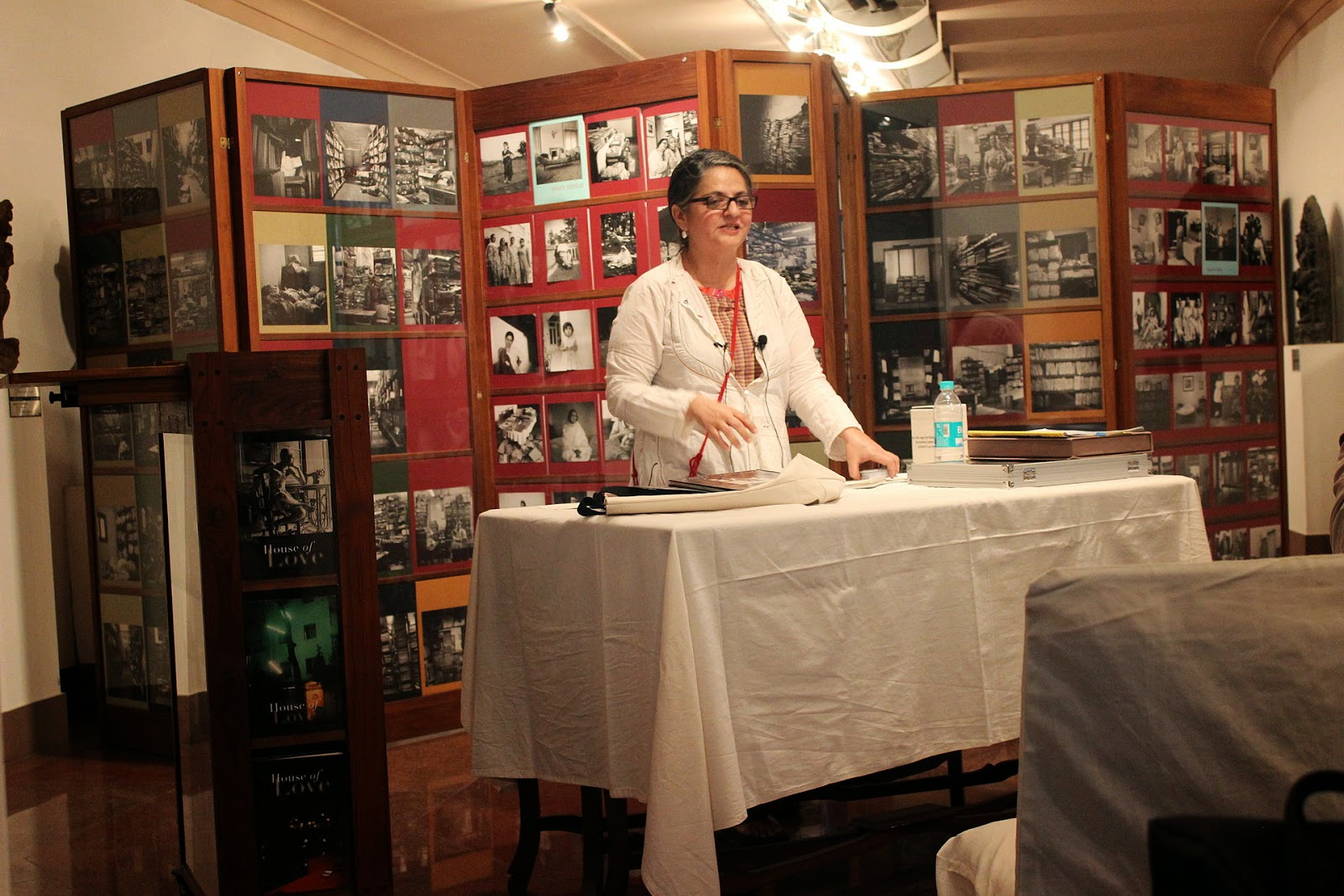 T. M. KRISHNA
T.M. Krishna (born in 1976) is a Carnatic music vocalist. Krishna's first concert was at the age of 12, at the Spirit of Youth series organized by The Music Academy, Madras. Since then, he has travelled widely in India and abroad and given over 2000 concerts all over the world, performing regularly in major international music festivals. He has performed at prestigious venues including the Kennedy Centre, Theatre de la Ville, The Esplanade, Sydney Opera House, Chowdiah Hall Bangalore, and The Music Academy, Madras.

Then moved on to highlight, probably the best impressions that captured the essence of the book “File Room”. He says that as he went through the images, it represented something like his mind, where if you open one file, many different files opened simultaneous (just like the synaptic connections of nerves firing within) and left the viewers with a feeling of finding that story which is unique to him or her.

As Dayanita Singh rose to speak, she was visibly happy to see that some one at least know what’s her book is all about. She spoke about her incredible journey to be what she could be. Her creative journey started with an accident as for her class project, she was asked to capture different moods of a person and she chose to shoot Zakir Hussain, who was performing in a concert at IIM Ahmadabad. As she prepared to take her first picture, she was pushed by the security in the jam-packed hall and fell on her back, which fortunately did not broke anything other than her pride. As she went out to give vent to her frustrations, she found Zakir Husain, walking around (at the time he was not so famous). She reached out to tell him, ‘Some day I will also be a great artist and then no one will be able to push me’. And Zakir Husain calmed her down and asked to her come to his morning riaz (practice) and take as many pictures as she wants. Dayanita said that night was the life changer for me and made me realize what I want to do in life. From this encounter, and travelling with his troupe for 6 winters as a student photographer her first book came out in 1986 …

ZAKIR HUSSAIN
A teacher, as she said, who instilled in her, a desire to work 18 hours a day and stay focused.

The other teacher that influenced her life was an eunuch, Mona Ahmed, who was staying in a cemetery. A work assignment for London times (which eventually never happened as Mona Ahmed thought that she is from New York Times and felt that if it gets published in London, where many of her friends are, will find it not in good taste, so took all the rolls from her and dumped it in trash) got them together, which lasted a lifetime. But eventually Dayanita created an amazing visual biography of a double outcast Mona Ahmed through the words written by herself and portrayed by the analogue images from Dayanita Singh, known as...

MYSELF MONA AHMED
A mix of photobook, biography, autobiography and fiction, Myself Mona Ahmed (Scalo, 2001) keeps renewing its importance in Dayanita Singh’s oeuvre because of the direction in which her work is evolving.

And throughout her lectures she kept the audience enthralled with her easy talk and ready wit, interspersed with her fine, overpowering images being displayed on the projector.

At the end of the launch, as an amateur photographer myself, I tried to capture her through my smart phone (hated it, when I realised that I forget to bring my camera). But then how do you go about taking photographs of someone who is the world’s renowned photographer herself… well here are the results.

Finally I leave you with some of the books and photographs of Dayanita Singh that captured my imagination.

GO AWAY CLOSER
Go Away Closer is a novel without words. It concerns series of opposites in Singh’s India: presence and absence, reality and dreams, tradition and progress. She is able to express the emotion underlying these often abstract concepts, because her photography springs from her own intimate experiences.
HOUSE OF LOVE
"House of Love" is a work of photographic fiction that takes the form of nine short stories. Working closely with writer Aveek Sen, whose prose follows a journey of its own, Singh explores the relationship between photography, memory, and writing.
DREAM VILLA
In Dream Villa Singh explores how the night transforms what seems ordinary by day into something mysterious and unsettling.

BLUE BOOK
Blue Book is a series of images made during Dayanita Singh’s wanderings in the industrial landscapes of India. Presented by Dreamvilla Productions, India (an alias and nom de plume designed to mask Singh’s authorship), the book will be displayed in galleries and museums as a work of art.


What can a photographer in India capture on film other than disasters or the exotic? Dayanita Singh was preoccupied by this question after she had spent many years documenting the poverty in her homeland. Her answer was a return to the world from which she came, to India’s extended, well-to-do families and their fine homes. 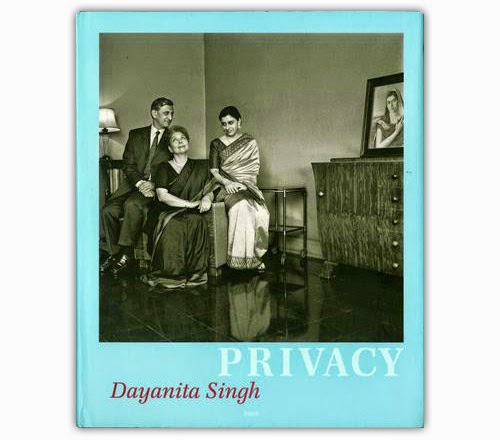 Text and image curtsy for the books - Dayanita Website
___


Posted by Shashidhar Sharma No comments: