Last Saturday, I was invited by the Indiblogger team to preview The ITC Grand Chola Hotel. This is one of the latest Grand additions to the hospitality sector of fast developing Chennai, which was inaugurated by Chief Minister of Tamil Nadu few months ago. Being in the profession of Interior Designs and Projects, It was a pleasure to spend a day in this beautifully crafted hotel, with exquisite artifacts and accessories highlighting the vast expanse of its interiors.

The tagline ‘Responsible luxury’ of ITC Grand Hotel is a statement true to the vision of ITC, which presents ‘First on Earth – The greenest Luxury Hotel Chain in the world, where every hotel is LEED Platinum rated.

Opened as the world's largest LEED-certified platinum (Highest in the category) green hotel, is 100 per cent powered by renewable energy. It recycles all its water and generates sustainable energy, through wind farms in Salem (Tamil Nadu – India), for the whole of its electricity needs. The building is designed by Singapore-based SRSS Architects, (Smallwood, Reynolds, Stewart, Stewart) who are equally committed to sustainability and incorporate in their designs, a broad spectrum of energy conservation, water use efficiency, indoor environmental air quality and material sourcing.

ITC Grand Chola is themed after traditional Hindu architecture of the Chola Dynasty. This architectural theme is reinforced with 462 pillars, most of them with hand-carved design work. The hotel has over 1 million square feet of marble with 57 varieties of the stone. The intricate stonework in the building was created by 4,000 artisans from Mamallapuram who worked on site. The hotel, built on 1,600,000 sq ft, is dubbed the largest stand-alone hotel in the country and will have the largest convention centre in the country built on 100,000 sq ft with a pillar less 30,000-sq ft ballroom. 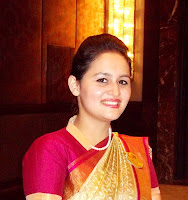 After circumventing the entire expanse of the Hotel, we arrived at a grand porch of the hotel. Our hostess for the day, Ms. Neelam, with a big welcome smile, explained that the roundabout access to the porch, is in line with the tradition of Chola Temple Architecture, where custom is to do Parikrama(Going around the temple). According to her, this concept of access is incorporated first time in the hotel industry of India. Apart from the tradition, I personally feel, it also serves a good purpose in orienting the guests to the huge expanse of the building. 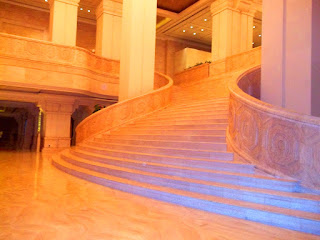 As you enter, the first thing that one notices is the smile on the faces of the entire welcoming staff, including the security personnel and then the spectacular entrance lobby welcomes you with open arms. The entire lobby is made with Italian marble, hand crafted by thousands of artisans from nearby Mamallapuram, gives a feeling of being inside of a temple.

The hotel is comprised of 600 rooms, which include 522 rooms and 78 serviced apartments. The rooms are divided into 326 Executive Club rooms, 31 Eva rooms, 132 Towers rooms, 48 ITC One rooms, 14 Deluxe Suites each measuring 1,164 sq ft, a presidential suite named the Karikalan Suite and a six-bay grand presidential suite named the Rajaraja Chola Suite spread over 4,380 sq ft.


The single rooms occupy an area of 615 sq ft (one of the largest in hotel industry) with exclusive lounge and private butler. There is a distinct wing, Eva wing, for female guests spanning the entire wing of the second floor. The hotel has three wings: the first or primary wing houses all Executive Club rooms, and the second wing contains ITC One rooms, Towers rooms and all the Suites. The third wing has been constructed exclusively for the Residences, offering the luxury accommodation.

The rooms are fully equipped with everything the technology has to offer in terms of hospitality and entertainment, starting with an iPad that can control almost everything electronic and electrical in the room. The most delightful feature of the iPad control was the facility to actually see who is on the other side of the door, ringing your doorbell and if required, one can open the door from the same. I have had great time exploring the well appointed room. The choice of restful arrays of pillows and the unique ITC Rest Kit, which has different types of oils, creams, etc. to give you that perfect sleep and relaxation. According to our hostess Ms. Neelam, it is proving to be  very popular among the guests.

The hotel has a total of 10 food and beverage destinations, including the Peshawri, which serves cuisine from the Northwest Frontier, and The Royal Vega, a vegetarian restaurant. Others include Madras Pavilion, Cafe Mercara, Nutmeg, Cheroot Lounge, Pan Asian, Modo Mio, The Pub and Tranquebar. The food in the various restaurants is authentic in taste, and a delight to savor.  Each restaurant is thoughtfully decorated, keeping in mind the tradition as well as the theme of that particular restaurant.

An interesting touch is a jukebox where one can play the song of one’s choice. I was told that this is a first in any Indian Hotel. It was a surprise to find the iconic Egg Chair in one of the lounges. I was thrilled to find the beautiful paintings of M F Hussein, specially the one from the old Chola Sheraton, which is currently priced at Rs. 10 Million. 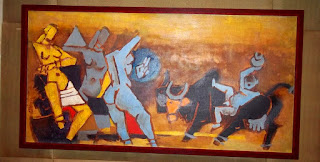 Going forward, the Leisure facilities will include a 23,000-sq-ft Kaya Kalp. There are beautiful Spa, outdoor pools, gyms for each of the three wings, and a shopping area.

Over all, the experience in the ITC Grand Chola was exquisite - a day well spent. The soft tone interiors and the grandeur of the hotel, slowly grows on you and the attentiveness of the entire staff, with smiling faces, remains with one for a long time... 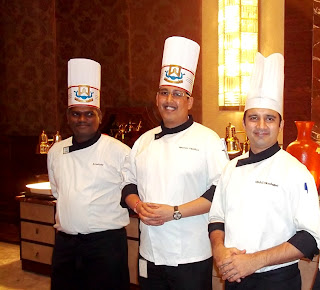 Curtsy: Info from ITC Chola Staff as well as from Wikipedia
IMG: All images, except as mentioned, is personal