“When a truly great and unique spirit speaks, the lesser ones must be silent”

As I keep repeating, sometimes the book chooses you rather than you choosing the book. When the time is right, suddenly a book drops into your lap like a blessing and leaves an eternal. This book “The Letters To A Young Poet” is one such book that has left me immersed in my own solitude without the fear of being alone and changed the way I look at my own doubts.

The “Letters To A Young Poet” is a deceptively simple book. The letters were originally written to Franz Kappus, a 19-year-old officer cadet at the Vienna Military Academy, of which Rainer Maria Rilke was an alumnus. Discouraged by the prospect of life in the Austro-Hungarian Army, Kappus began to send his poetry to the 27-year-old Rilke, seeking both literary criticism and career advice. Their correspondence lasted from 1902 to 1908. In 1929, three years after Rilke's death, Kappus assembled and published the ten letters.

Franz in his introduction says, “Important alone are the ten letters – important for the understanding of the world in which Rainer Maria Rilke lived and worked, important also for the many who are growing and evolving now and shall in the future. When a truly great and unique spirit speaks, the lesser ones must be silent”

Through his letters, Rilke guides the young boy, Franz, out of the labyrinths of doubts, answering his questions about life, love, loneliness, passion and sex as well about God. An amazing book which in my opinion needs to be read by every aspiring artist, young people and anyone is afraid to be alone in one’s own solitude.

BRIEF NOTE ON THE GREAT POET RAINER MARIA RILKE
René Karl Wilhelm Johann Josef Maria Rilke (4 December 1875 – 29 December 1926), better known as Rainer Maria Rilke, was a Bohemian-Austrian poet. He is considered one of the most significant poets in the German language. His haunting images focus on the difficulty of communion with the ineffable in an age of disbelief, solitude, and profound anxiety: themes that tend to position him as a transitional figure between the traditional and the modernist poets.

He wrote in both verse and a highly lyrical prose. Among English-language readers, his best-known work is the Duino Elegies; his two most famous prose works are the Letters to a Young Poet and the semi-autobiographical Notebooks of Malte Laurids Brigge. He also wrote more than 400 poems in French, dedicated to his homeland of choice, the canton of Valais in Switzerland.

THOUGHTS FROM “LETTERS TO A YOUNG POET”
Foreword:
“All of us who labor in the arts know that it can be a lonely existence. We often find ourselves living a life of solitary dreams, disconnected from others, and driven by a vision that no one else seems to value or share. On some days, this can becomes overwhelming. We then thirst for a single voice of understanding that will reach into our solitary lives and reassure us that the path we have chosen is worthy, and that the rewards it offers are worth the loneliness it entails.” – By Kent Nerburn
_______
For one human being to love another is perhaps the most difficult task of all, the epitome, the ultimate test. It is that striving for which all other striving is merely a preparation.

Put it (The need to write) to this test: does it stretch out its roots in the deepest place of your heart? Can you avow that you would die if you were forbidden to write? Above all, in the most silent hour of your night, ask yourself this: Must I write? Dig deep into yourself for a true answer. And if it should ring its assent, if you can confidently meet this serious question with a simple, “I must,” then build your life upon it.

Do not write love poems, at least at first; they present the greatest challenge. It requires great, fully ripened power to produce something personal, something unique, when there are so many good and sometimes even brilliant renditions in great numbers.

If your everyday life appears to be unworthy subject matter, do not complain to life. Complain to yourself.

Lament that you are not poet enough to call up its wealth. For the creative artist there is no poverty – nothing is insignificant or unimportant.

A piece of art is good if it is born of necessity. This, its source, is its criterion; there is no other.

To feel that one could live without writing is enough indication that, in fact, one should not.

We are unutterably alone, essentially, especially in the things most intimate and most important to us.

Scale the depths of things; irony will never descend there.

To be an artist means not to compute or count; it means to ripen as the tree, which does not force its sap, but stands unshaken in the storms of spring with no feat that summer might not follow.

Actually the creative experience lies so unbelievably close to the sexual, close to its pain and its pleasure, that both phenomena are only different forms of the same longing and bliss.

Reflect on the world that you carry within yourself. And name this thinking what you wish… Your innermost happening is worth all your love.

For what would aloneness be, you ask yourself if it did not possess greatness? There exists only one aloneness, and it is great, and it is not easy to bear.

Your innermost happening is worth all you love. You must somehow work on that. 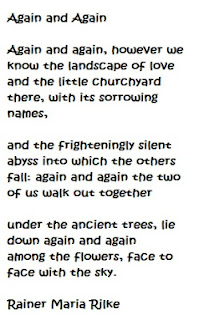 Why don’t you think of Him (God) as the coming one, who has been at hand since eternity, the future one, the final fruit of tree, with us as its leaves?

Don’t you see that everything that happens becomes a beginning again and again? Could it not be His beginning, since a beginning is in itself is always so beautiful?

…we must embrace struggle. Every living thing conforms to it. Everything in nature grows and struggles in its own way, establishing its own identity, insisting on it at all cost, against all resistance.

To love is also good, for love is difficult. For one human being to love another is perhaps the most difficult task of all, the epitome, the ultimate test. It is that string for which all other striving is merely preparation.

However the process of learning always involves time set aside for solitude. Thus to love constantly and far into a lifespan is indeed aloneness, heightened and deepened aloneness for one who loves.

Love does not at first have nothing to do with arousal, surrender, and uniting with another being – for what union can be built upon uncertainty, immaturity, and lack of coherence? 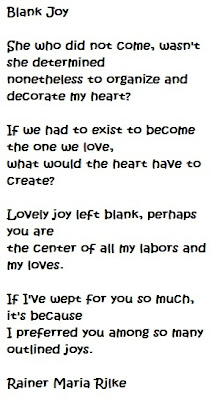 Young people often err, and that intensely so, in the way, since it is their nature to be impatient: The throw themselves at each other when love comes upon them. They fragment themselves, just as they are, in all of their disarray and confusion. But what is to follow? What should fate do if this takes root, this heap of half-broken things that they call togetherness and that they would like to call their happiness?

Perhaps all dragons in our lives are really princesses just waiting to see us just once being beautiful and courageous. Perhaps everything fearful is basically helplessness that seeks our help.

It’s often the name of the crime upon which a life shatters, not the nameless and personal act itself at all.

Allow life to happen to you. Believe me, life is right in all cases.

All feelings that integrate and inspire are pure. Impure is the feeling that touches only one side of your being and is tearing you up so.

Act with alertness (on your doubts) and responsibility, each and every time, and the day will come when doubt will change from a destroyer to become one of your best fellow-workers, perhaps the wisest of all that have a part in building your life.

Art also is only a way of life, and we can, no matter how we live, and without knowing it, prepare ourselves for it.