The most awaited event of the new year for me, since last few years, has been Hindu Literary Festival which comes to a close today. This year too, it brought me in touch with wonderful writers from across the world. The interaction with humble Markus Zusak - Author of the book 'The Book Thief', unassuming and prolific Author Shashi Tharoor - who could produce a well researched book on British Colonialism, based on his viral video. The  wonderful sessions of many authors and commentators, I attended was absolutely enlightening. Spending some time with Pulitzer Prize winner Geraldine Brooks, getting to know her thoughts and ideas, meeting my old friend and mentor Timeri N Murari as well as some friends from Chennai Blogger's Club added an extra interest to the festival.

This year's Festival was also special as my two good friends Dr. Chithra Madhavan and Sharon Apparao conducted wonderful workshops which were not only interesting but  engrossing as well. 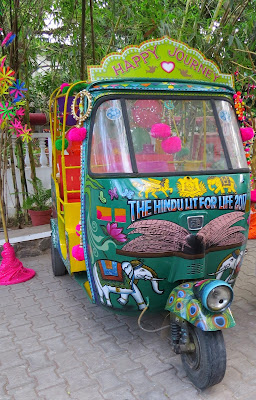 And as the festival came to an end, the winners of the Hindu Lit Festival are Chennai Book Lovers... who joined in a very Happy Journey (as the auto at the venue declared) on the day of Hindu New Year Festival - Sankranti which also kick started my own literary journey with twin city launch of the Hindi translation of my book "Songs of the Mist" - Kuhaase ke Geet at Mumbai (18th Jan) and at Delhi (4th Feb) by my publisher Story Mirror. Hopefully the year 2017 will continue to be on happy note, as I start off on another journey to Mumbai University where I am conducting my Workshops on "Writing and Haiku" @ SMYCC...

But the real winner with a lovely acceptance speech was Kiran Doshi, who received this years coveted Hindu Prize of Fiction for his book - 'Jinnah Often Came to Our House'.

The final days of the Hindu Lit Fest was interspersed with many interesting sessions, beginning with Vivek Shanbhag - the Kannada Author, whose mother tongue is actually Konkani, declaring that the first quality of a writer is to be courageous. I could relate to personally as well as to his quote that... 'The Word has so many memories'.

The session with Kanhaiya Kumar - a mellowed down iconic JNU Ex-President began with his thoughts on the topic 'Is India Ready for Revolution?'

"Forget revolution, currently we have a crisis of opposition". He went on to add in his english - hindi mixed talk (for which he apologised to begin with)...

"The current situation of young generation and education system is such that degree has become important, while education is not" - Kanhaiya Kumar

The most awaited session personally for me was of the author of the book "The Book Theif" - Markus Zusak. A very humble person, who when asked to read few lines from his iconic book, not only read as he would usually do but also read it in the way a professional will, which was hilarious.

"Writers love to be miserable, that's what being a writer is all about" - Markus

"The good part of the book is that it develops friendship." - Markus


This year the Hindu Lit Fest received record footfalls, as Nirmala Lakshmanan (Program Director and Director of Hindu Group) shared the fact sheet at the beginning of the festival that the festival has generated huge response to begin with. It has pre-registered 15K participants on the day one and I believe it was more than that... Here is a picture which endorses the view... 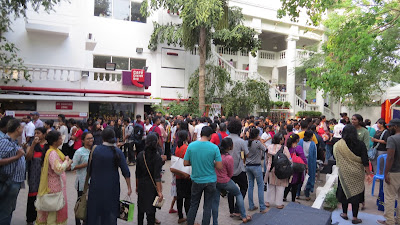 Leaving you with some pictures with some of my friends... from the Hindu Lit Fest.

Hope you have enjoyed the journey with me, signing off 2016 Hindu Lit Festival... Cheers