2nd Day of Hindu Literary Festival and the winner is ... Hindu and HIRCO (Main sponsor of the evening) for providing such an uplifting experience.

It was a pleasure to see a very talented and humble person and a new friend, Rahul Bhattacharya winning ‘The Hindu Literary Prize for Best Fiction 2011' for his lovely book “The Sly Company of People Who Care”. The book tells the story about a young Indian's Caribbean adventures in the company of a Guyanese diamond-hunter in a very fresh way. As this post is about the Hindu “Lit For Life” festival, I will restrict myself to the same but not before recommending everyone to read this book, more so if you are planning to visit Guyana as it has the captured the soul of the place and people.

In its Sunday Review Column, New York Time’s Dinaw Mengestu says about the book, ‘But its (book’s) heart lies in the exuberant and often arresting observations of a man plunging himself into a world full of beauty, violence and cultural strife” (To read the full review, click here...)

The session on the Sunday morning felt like having a chat with friends with an aroma of freshly brewed filter coffee in the air. The discussion about juggling two passions i.e. being a writer as well as a surgeon, Kavita brought out her heartfelt thought, which I could relate to. “As a writer, you are taking a tremendous risk in bringing out into the open your inner feelings and thoughts”.

K Srilata, a professor of Humanity at IIT, shared her lovely journey of being poet and a writer. “I began as a poet and it has helped a lot in writing”.

This discussion was about transforming words to image, about the essence of capturing the texture of society through movie script and camera, which was very beautifully steered by K Hariharan, who engaged stalwarts of Tamil Cinema and powerful script writer from Bollywood Anjum Rajabali (who has given us movies like Gulam, Rajneeti, Aarakshan etc.) effortlessly. It was a pleasure to see and hear the 80 year old Singeetham Srinivasa reminiscing about the old days and how the movies were made at that time. He advises, “The most important for good films is the back drop and texture of the society.

Anjum Rajabali said, answering to Hariharan’s query about how he gets started on writing a script for movie, “Usually it starts with a question – What if...? e.g. in situation like a mother gets off from a bus to fetch water for her child, what if the bus leaves before she gets back?. He says that he usually writes what he would like to see on the screen.

Talking about Pushpak, the director Mr. Singeetham said that there were innumerable pressures from the producers, distributors to add some song or at least a dream sequence in the movie which was without any dialogue, but I refused to do so as that movie did not require it. But when I make a popular movie, I go all out to add color and sound to it. He remembered that when the first time he saw Chitralekha (a super hit movie Tamil Movie), he did not like it as he was young, idealist and was full of perceptions about good movies. But years later when he saw it again, he enjoyed it very much. He admits now that what took seconds for the masses to appreciate, took me 25 years.

Well with 100’s of people in the jam packed hall at Hyatt Hotel, one can not really have a workshop. So it turned out to a kind discussion about and appreciation of the art of translating, which was very well handled by Mini Krishnan.

The session had it's high points like sharing three different translation of a Hindi paragraph from a very powerful 100 year old story – The chess Player by the great Hindi writer Munshi Premchand. Arunava Sinha got the audience worked up to the point of being equally divided, supporting all three versions. Personally I was sure that the first version was the best as सिर धुनना (Sar Dhun-na meaning slapping on the head with one’s own hand – not as one of the lady from the audience said “scratching head”) in the context only meant ‘utter sorrow’, like what one feels in case of the death of one’s family member. That was the only time, I actually stood up to clarify, but by the time I could catch attention of the moderator, the discussion had passed on to other things.

Ultimately the session ended with the thought that there is no right or wrong way to translate, only responsible way to convey the essence of the book. “Yes, when you pour perfume from one bottle to another, you are bound to lose some of its essence” as Shabana Azmi pointed out in the very next session...

Clad in very beautiful sari, Shabana Azmi was grace personified. And as she went on to talk about the beautiful book “Kaifi and I” written by her mother Shaukat Azmi, she shared that the love for sari she had inherited from her mother. After landing at Chennai Airport, she took time off to change into sari to come to this festival.

“I learned acting from my mother as she was very focussed and sincere actor who will sink into the character days before the play and keep repeating the dialogues, wherever she was” says Shabana Azmi and goes to share a lovely story about how her mother kept everyone in the household on tenterhooks when she was preparing for the role of “Pagli” – A mad woman. She says that her focus on social work was inspired by the thought of her father that “the art should be used for social change” and triggered by one of the women from a slum, who she got to know (and later on became a good friend), when she was acting as one.

“No, there was no pressure at all from my father, Kaifi Azmi for doing social work, as he was convinced that the soil is ready (by the samskaras, he has passed on to his children) and at the right moment, the plant will take root” answered Shabana Azmi to a question, if there was pressure growing up as child of a political activist.

Moving on, let’s talk Cricket with veteran’s of Cricket Journalism – a passion equally shared by Mr. Shashi Tharoor who was the chief guest of the day. 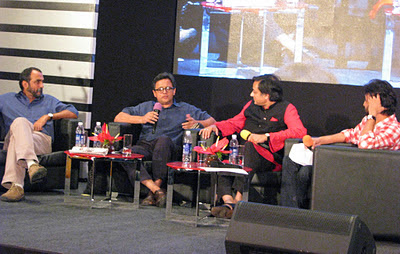 A really gifted gathering in terms of sports journalism with veterans like Mukul and Rahul Bhattacharya along with Shashi Tharoor, who has been passionate about cricket since long. There was much sharing of anecdotes and memories about sports in general and about cricket in specific, but I am leaving you with two in particular here.

In response to the sentiments of one of the audience, that we should not waste time in playing, watching or talking about cricket, when there is poverty to eradicate, social issues to tackle etc, Shashi Tharoor says, “Would you say that people should not listen and watch the music festival that happens in for almost a month in every December in Chennai. Yes there is poverty, there are other issues and challenges facing the country, but cricket is something that inspires people too, makes the gifted one’s to reach heights that would not have been possible otherwise for people who come from very different back ground like Dhoni, Irfan and so many more”

And the show goes on... leaving you with some thoughts and images from the upcoming two sessions and final culmination of the two days of Hindu Literary festival “Lit For Life 2011” into the award function.

With Nisha Susan as gracious host and a very humble and down to earth guest, Vikram Seth, the session was uplifting for the jam packed hall at Hyatt hotel with crowd lining along the wall as well as filling the lobby where a large LCD was placed for people who could not get space inside. With poetry and music, Vikram Seth kept the crowd asking for more... and then came the final crescendo, with Vikram getting up and reciting “Fire, Faayar, Faayaar...” to thunderous round of applause... The session was too beautiful to convey by mere words, so I am leaving you with some images...

All in all, it was a tremendous experience for me, to see, learn and assimilate various thoughts from the stalwarts of literature, media and movie in two days of the Hindu Literary Festival 2011.

This post is for the people who have missed to be there at the festival, although I could not upload all the images that I have had taken, to share. If you like any one of the images up there, let me know, I would send the HIGH Resolution images.

I hope you have enjoyed the journey with me at Hindu Literary Festival 2011 – Chennai and to read the first day's going on, please click here...
______________________________________
On the side lines of festival...
It was actually very funny to see, the clock work performance of “Attention seeking three musketeers”, as one of the lady aptly named the kind. They will be invariably up at one time or another, in each of the session of the festival, to grab the mike and ask, in their own very typical way, some banal, pseudo intellectual questions.