An interesting story (Novella) that I recently read about life. A girl's desires and feelings, before and after marriage to a much older person so beautifully envisaged by Tolstoy.
Interestingly, this is the first time Tolstoy narrated the story through the main character of the heroine (Masha), which apart from being very difficult for a male, as at the time, he was an young unmarried writer; goes on to show his uncanny ability to get under the skin of his characters.
His amazing description of young girls emotions, his take on the feelings of young and then matured person in the ways of the world of Russian Social life, before and after marriage, is great and to me, looks quite truthful.}
FamilyHappiness, published first time in 1859, like almost all the novels of Tolstoy has an autobiographical connection. Tolstoy (then 31 years old) met 20 year old Valerya Vladimirnova Arsenyeva in 1856, and fell in love. And as told to his biographer, he almost got engaged to her. Later as recollected by Valerya’s daughter in 1926, told to Mr. P Pavlov, that they actually parted company because Valerya refused to accept the conditions which Tolstoy attached to his proposal of marriage: 20 years’ quiet seclusion in the country. 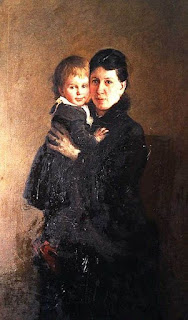 Though never married, it seems Tolstoy wrote ‘Family Happiness’ – which is about marriage, to prove to himself that their marriage would not have been successful. While he was writing it, he was most enthusiastic about it and described it as a poem, but when he had finished it, he was reluctant to have it published as he disliked it intensely.
Brief Note About The Author
_______________________


Since Leo Tolstoy is quite well known, I will skip the usual biodata of the author (Toread it at Wikipedia, click here) but will reproduce something that caught my eyes…


Countess Tolstoy writes about Leo Tolstoy
In 1909, writing of “Who are the murderers?” Countess Tolstoy wrote, “…it could be interesting. But the same old reproach – descriptions of peasant life. His relish at a woman’s full bosom and a girl’s sun burnt legs, all that once so strongly tempted him; … “
____
BACK TO THE BOOK...
Now here are some of the thoughts I enjoyed reading from the book…
He (Sergy) was right when he said that there was only one happiness in life – to live for others. (Masha)
“A man can say that he is in love, but a woman cannot.” She (Katya) said. “But I don’t think a man should say he loves someone, either; nor can he,” he (Sergy) said. “Why not,” I (Masha) asked. “Because it always be a lie. Is there really anything, new in the fact that a man loves someone? As if, as soon as he says it, something clicks, bang – he is in love. It is as if, as soon as he pronounces this word, something extraordinary must happen, there should be some omen, all the trumpets should sound at once. It seems to me, “he continued, “that people who solemnly pronounce the words: ‘I love you’ either deceive themselves or, even worse, deceive others.”
It was as if I was in a happy dream in which it seemed that everything in the future had already happened, and that I had known about it for a long time, and yet I felt that it would happen again, and I knew that it would happen. (Masha)
A quiet, secluded life in our country back water, with the possibility of doing good to people whom it is easy to do good to because they are not used to it; then work – work which one thinks is useful, then rest, nature, books, music, love for the person who is close to you – that’s my idea of happiness. (That is) For me, whose youth is over, that is, but not for you,” he went on. “You haven’t lived yet. You may want to look for happiness elsewhere perhaps, and perhaps it is elsewhere that you will find it…” (Sergy)
Can one really feel annoyed about anything, when one is as happy as I am? It is easier to yield than to impose one’s will… (Sergy)
Once I had experienced the happiness of falling in love with him, I could not rest content with affection. I wanted movement, not the calm flow of life. (Masha)
Worst of all, I felt that , with each day, the habits of live were moulding our life into a definite pattern, that our feeling was ceasing to be free and was being subjected to the even, passionless flow of time. (Masha)
I want to move forward, and every day, every hour I want something new, but he wants to stay still and to hold me back with him. (Masha)
My former religious ecstasy and the love I had once felt for him, the old fullness of life, now seemed so distant and impossible. I would not now have understood what had before seemed to me so obvious and right – the happiness of living for someone else. Why live for some else when there is no desire to live for oneself? (Masha)
Why did you let me have my freedom, which I did not know how to use? (Masha)
“There is season for every love…. When I first got to know you I spent sleepless nights thinking of you, and created my own love, and that love grew and grew in my heart, so, in Petersburg and abroad, I spent dreadful nights awake destroying, breaking up that love which tormented me.” (Sergy)

How to write a book - Milan Kundera
Posted by Shashidhar Sharma