Karl Marx memorable words provide a gloss for the status of industrial design I a world where the most important commodity, gigabyte of information, is invisible. Now the corporations are gone, markets are fragmented. We are dematerialized and the world is flat. Anything or any body can be anywhere else instantaneously. Centers of excellence are not , The Corso Vittorio Emmanuele or New Canaan, but . Taste is directed not by Domus or The Architectural Review, still less the sclerotic Design Council, but by what comes through the broadband connection: unmediated, unedited, populist not elitist. The forces directing consumer culture have changed from push to pull, notably described in James Surowiecki’s ‘The Wisdom of Crowds (2006). The most powerful forces in the world are the organize electrons of modern communications. And they are invisible. Every one knows that 60 GB is important, but no one has a clue what they look like. And designer, in search of meaning and justification, have turned themselves into commodities and then into brands, aping the process once applied to products, but applied now to personalities. 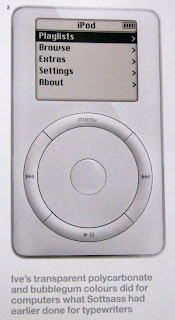 And the great business model that the 20th century design established is no longer relevant. Pioneer industrial designers argue forcefully that there was a ‘cash value of art’ that artful transformation of banal objects could win sales and make beautiful profits. Nowadays, there are very few ugly products left to transform. A single rule-proving exception is Jonathan Ive’s iPod.
Design is maddening to define as it is pleasing to enjoy. F H Gombrich once said there is no such thing as art, only artists. May be you could apply that to design and designers.

Given below are some of the very best of them…