Musical innovator Andrew Bird winds together his trademark violin technique with xylophone, vocals and sophisticated electronic looping. Add in his uncanny ability to whistle anything, and he becomes a riveting one-man orchestra.
Why you should listen to him: 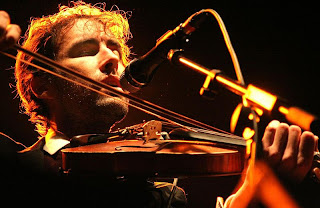 Andrew Bird began to play the violin at age 4, learning to play Bach and Mozart by ear as if they were folk tunes. Though raised on classical repertoire, he still has little use for the written note and spins melody and words out of his cumulative experience, mixing elements of many genres without confining itself to any one in particular. While his early work with his band Bowl of Fire was influenced by pre-war jazz and showcased his violin skills, his sound began to evolve in an indie-folk direction after he went solo. But indie-folk -- or any single genre -- is just a backbone for a swirl of loops, samples and gorgeously rich instrumentation underpinning lyrics of mysterious import.
In 2002, Bird flew his coop for rural to live the rural life (yes, he had chickens) and set up his studio in a converted barn. This new environment inspired his 2003 solo album, Weather Systems, which has a surreal quality and poetic, thought-provoking lyrics. His sound progressed further with his 2005 album, The Mysterious Production of Eggs, which used multitrack recorders and loop pedals to layer samples, and featured more guitar, whistling and glockenspiel. Bird released his fifth solo album, Noble Beast, in early 2009 to acclaim; he's now working on a film score and an art installation.
"The violin is just the easiest way I have to express what's in my head. I'll just fully, unconsciously do whatever it takes to make that sound happen."
Andrew Bird
Now sit back and enjoy his unique style of music and his talk Click here
Text and Image Source: TedTalk
To know more about him, visit Wikipedia
_____________
ॐ नमः शिवाय
Om Namah Shivaya
Posted by Shashidhar Sharma