Some times you come across interesting things by chance. This is what happened to me when me and my brother were searching for a Home Theater system and for the Demo, the JBL guys played Andrea Bocelli’s song “Dare to Live” and that was a revelation to us. Loved the music and the voice so much that we requested the JBL systems guys to play more of his songs and then back home researched about him and found out some CD’s of his songs and enjoyed it thoroughly. So here is hoping you will also like this singer and a very creative artist. 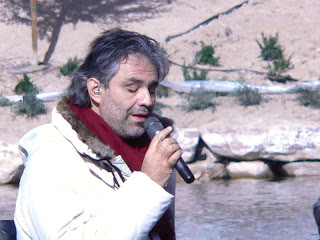 Andrea Bocelli, Grand officer OMRI (born 22 September 1958) is an Italian tenor, multi-instrumentalist and classical crossover artist. Born with poor eyesight, he became completely blind at the age of twelve following a soccer accident.
Since winning the Newcomers section of the Sanremo Music Festival in 1994, Bocelli has recorded thirteen solo studio albums, of both pop and classical music, two greatest hits albums, and eight complete operas, selling over 70 million copies worldwide. Thus, he is the biggest-selling solo artist in the history of classical music and has caused core classical repertoire to "cross over" to the top of international pop charts and into previously uncharted territory in popular culture.
In 1998, he was named one of People Magazine's 50 Most Beautiful People. In 1999, his nomination for Best New Artist at the Grammy Awards marked the first, and so far only, time a classical artist had been nominated in the category, since Leontyne Price, in 1961. The Prayer, his duet with Celine Dion for the animated film, The Quest for Camelot, won the Golden Globe for Best Original Song and was nominated for an Academy Award in the same category. With the release of his classical album, Sacred Arias, Bocelli captured a listing in the Guinness Book of World Records, as he simultaneously held the top 3 positions on the US classical albums charts. Five of his albums have since reached the Top 10 on the Billboard 20, and a record-setting 7, have topped the classical albums charts in the United States.
TEXT and Image Curtsy: Wikipedia Click here to read more
______________

Here is some of the music that I love and specially the “dare to live” and his lovely rendering of Besame, Besame Mucho.


Click on the following to listen to the songs
Dare To Live
Sogno (recommended by Ramey Channell in the comment below and I loved it, thanks)
__________